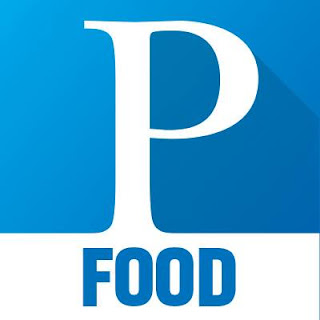 BOYNTON BEACH — Palermo’s Bakery is delicious.   I went there for the first time this past weekend.

It was one of the Boynton Beach stops on Lori Durante’s Taste History Culinary Tours. I had heard of the tour before, and have seen the news releases, but never went until my colleague Lulu Ramadan, the Post’s Delray Beach reporter, asked if I wanted to go.

I said sure, but honestly, there was a bit of hesitation. It’s between three and four hours long. That’s a long time, I thought. And on a Saturday?

But I quickly learned this history, food and arts tour is one of the best ways to spend your Saturday. 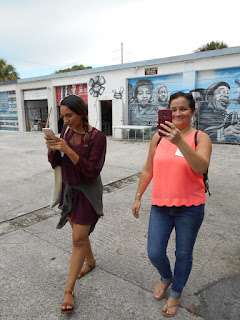 You won’t find a friendlier business owner than Sweet. Cabana El Rey has delicious food, especially the guacamole. The French Bakery has amazing focaccia bread. I fell in love with Hurricane’s pasta salad and seafood bisque. I could stare at the murals of art on Industrial Avenue all day.Lori J. Durante has been nominated for the Glass Ceiling Award by the South Palm Beach County Alumnae Chapter of Delta Sigma Theta Sorority. Among her achievements is the establishment of the Taste History Culinary Tours of Historic Palm Beach County.


I plan to go back to all the places. But when I return to Palermo’s it might be by Uber. The bakery offers a Babarum, which is basically a small piece of cake soaked in warm water and rum. I took a very small bite Saturday and decided to put it down because I had to drive home. It was delicious — but loaded with alcohol. Next time I’ll be prepared.

The Delray/Boynton tour was the first of the fall 2016 season. Taste History is the first culinary tour in Palm Beach County, and the nonprofit was started in 2011. The tours rotate trips to West Palm Beach, Lake Worth, Lantana, Delray and Boynton. The next tour is Saturday in West Palm Beach and Lake Worth. 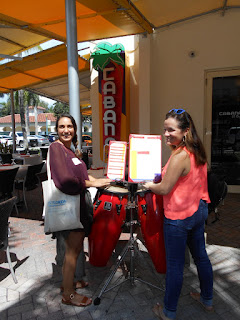 We tasted Delray and Boynton Beach,

and it was eye-opening…

DELRAY BEACH — Did you know Atlantic Avenue was once called Sundy Highway, named after Delray Beach’s first mayor, John Shaw Sundy? Or that Cabana El Rey on Atlantic Avenue is a family-owned restaurant?
I started covering Delray Beach about two months ago, and I think I learned more about the city in one three-hour food, art and history tour than in two months roaming this village.

Lori J. Durante , founder of Taste History Culinary Tours of Historic Palm Beach County, stands inside Palermo’s Bakery in Boynton Beach, one of the stops in a cultural culinary tour of Delray and Boynton Beach. (Photo contributed)
The Palm Beach Post’s Alex Seltzer, who covers Boynton Beach, and I signed up for a Taste History Culinary Tour of Delray Beach and Boynton Beach, guided by Lori Durante, a prolific source of knowledge about Palm Beach County.
Taste History is Durante’s brainchild, a cultural culinary tour that takes you by air-conditioned bus to different family-owned restaurants, art districts and other local hotspots. She started the tour five years ago covering just Delray Beach, but has since expanded to cover Boynton Beach, Lake Worth and West Palm Beach.
Each tour, which is once a month in each city, is $65.
On Saturday, we joined Durante and a group of about 18 others on a tour of Delray and Boynton, with Durante narrating the long histories of each city as our bus traveled the length of the tour. Each tour is unique, as Durante chooses different family-owned eateries and art destinations each month.
I learned a great deal about my city, and met the unique people behind some popular southern Palm Beach County destinations.
Alex and I documented our experience on The Palm Beach Post’s Snapchat. You can check out the video below.
Here are some of my highlights:
Delray doesn’t end at Swinton. There’s a rich history behind the Swinton Avenue divide. This roadway once separated the white and African-American neighborhoods during the era of segregation. Now, the west portion of the city is rich with Floribbean — Florida mingled with Carribbean — cuisine and preserved African-American history, like the Spady Museum, the former home of Solomon D. Spady, a well-known educator and community leader.


There are still family-owned destinations, despite recent growth. I often hear complaints that over-development in Delray has forced out some beloved, longtime shops and restaurants. But there are new ones popping up often, like The French Bakery on Federal Highway near George Bush Boulevard. Not only is this bakery, which opened this past summer, family-owned, but it uses mostly locally sourced ingredients and sells goods from other local businesses, likeThe Delray Beach Jam Company.We visited Sweet’s Sensational Jamaican cuisine, on Southwest 5th Avenue at Atlantic Avenue. Ivet Durrant opened the small eatery three years ago, making traditional Jamaican foods from scratch every morning.


We visited The French Bakery on the tour, as well as Cabana El Rey, a family-owned chain that blends foods from several Latin American cultures, mimicking the cultural makeup of Florida.
If you’re interested in a Taste History Culinary Tour, check out the website here.
Alexandra Seltzer’s look at the Boynton Beach tour will be on line Wednesday and in print editions Thursday. 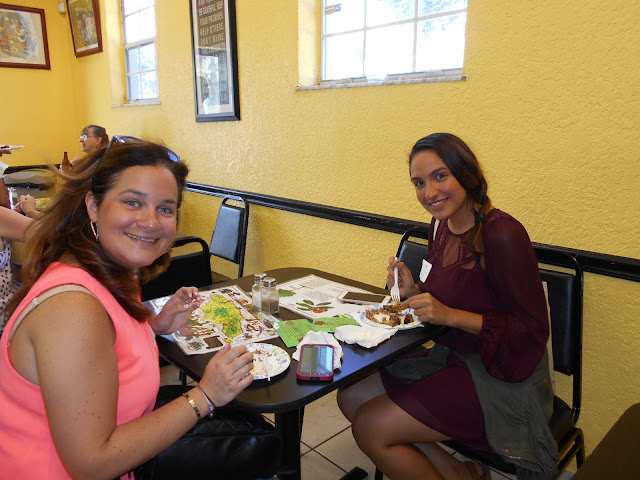 The non-profit Taste History Culinary Tours of Historic Palm Beach County, Florida has been designated one of the official community event partners for the State of Florida’s Viva Florida initiative.

The tour program includes bus riding and 4 to 6 blocks of walking. The mission of the tour includes incorporating education about food culture and food history with the food tastings thus dietary restrictions cannot be accommodated.
Taste History is sponsored, in part, by Macy’s. Sponsorship opportunities are still available. Additional support for Taste History has been received from Kingston Fresh, Carl and Iris Apfel; and bequests from the late Patricia Ann Ravo and the late Boris & Edith Rueger.

Posted by CulinaryToursFlorida at 8:22 PM No comments: 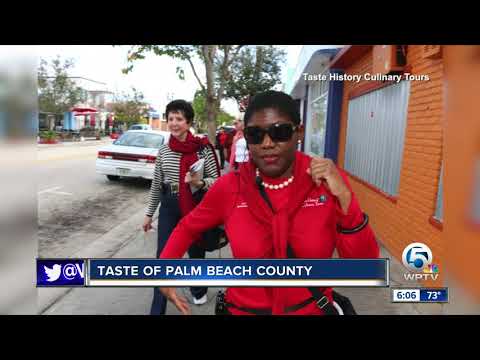